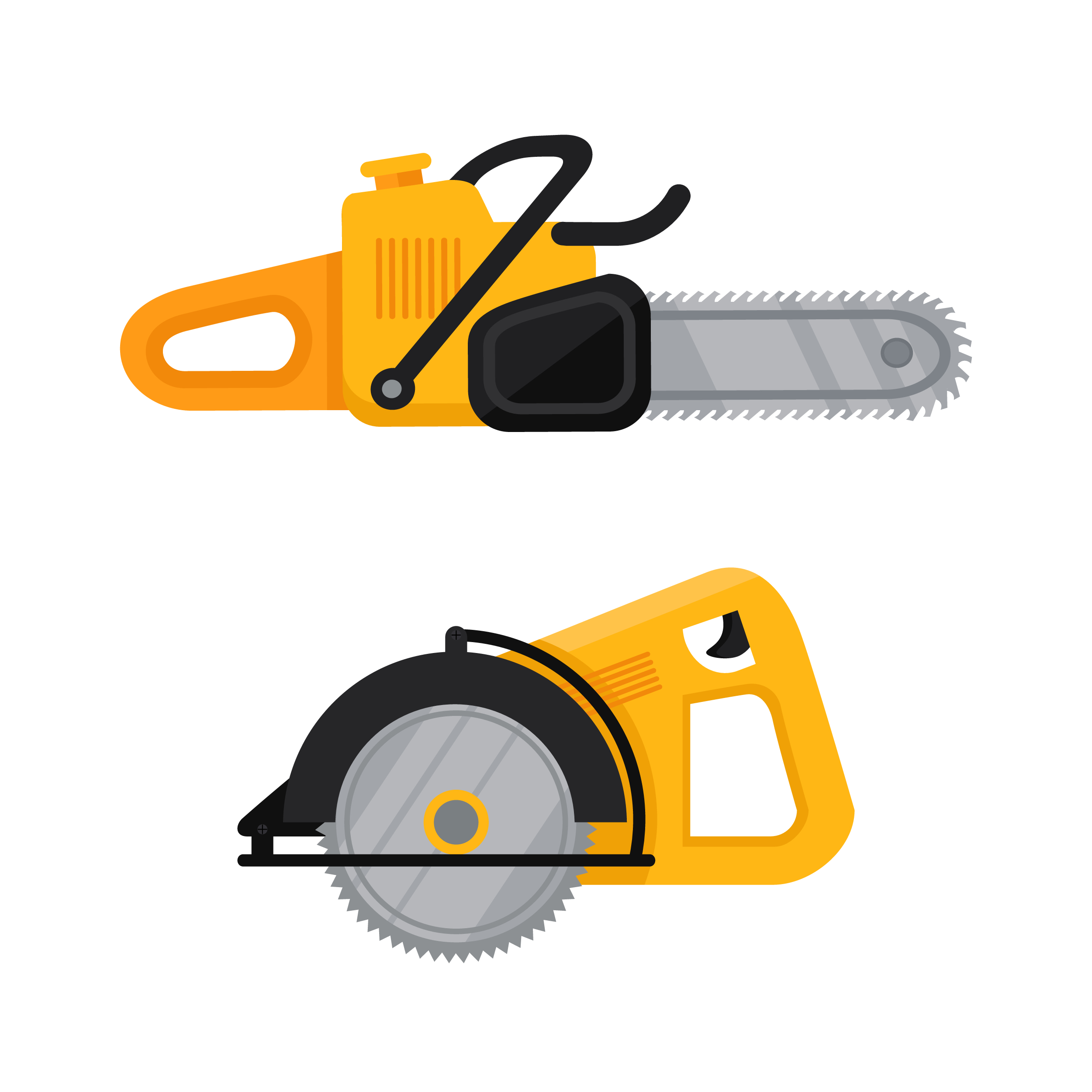 So, you want to get into woodworking, and you want to do so from scratch, which means cutting down your own trees, preparing the lumber, cutting boards to size, and then building whatever it is that you want to build. Any good woodworker and lumberjack needs to have the right tools at hand.

Chainsaw vs. Circular Saw – What are They?

Before we get into a comparison of both of these tools, let’s quickly talk about what they actually are.

A chainsaw is a type of saw that comes with a long arm, that features a chain that moves in a single direction on that arm; the chain has sharp teeth intended to quickly rip and cut wood. A chainsaw is quite simple to use — just turn it on, the get chain moving at top speed, and move it through wood.

The main use of a chainsaw is usually to cut down trees and to cut logs apart into smaller sections, although with the right attachments, you can also mill lumber using a chainsaw. In other words, a chainsaw is usually used for rougher and larger cuts. Chainsaws tend to be very loud, heavy, and powerful. Sure, there are smaller options out there, but if you want to cut down a large tree, you need a large chainsaw.

A circular saw is a much smaller type of saw. Instead of having a long arm with a sharp chain that moves along the arm, a circular saw features a circular metal blade with teeth; instead of moving in an oval pattern along an arm, the circular saw’s blade simply spins in a circle.

Circular saws tend to be much smaller and lighter than chainsaws, and they are generally used for much smaller jobs. Where a chainsaw is used to cut large logs or pieces of wood, a circular saw is usually used for cutting small boards, like making simple crosscuts for carpentry. Essentially, they are two very different tools with different purposes.

Now that we have gone over what these tools are, let’s go a little more in depth in terms of their uses, features, and benefits which they bring to the table.

One of the big differences is that these machines usually use different power sources. On the one hand, circular saws are usually going to be electric, and usually they are plugged into a power outlet. You might find circular saws that are battery operated, but most require an AC connection to provide them with enough power. You usually won’t find gas-powered circular saws because they are meant to be fairly small and used indoors, so a gas engine doesn’t really work for that.

On the other hand, chainsaws, the powerful and heavy duty ones, are going to use a gas-powered engine. Now, of course, you can find electric chainsaws, and they can be battery powered or corded, but these are not great as they usually have limited power and operational distance. When it comes down to it, a good chainsaw is gas powered, and a circular saw is corded.

The biggest difference between a chainsaw and a circular saw is what they are used for. Chainsaws have very long arms with a long cutting area. So, for instance, you can get a chainsaw with a 2-foot arm, and therefore, you can cut down some really wide trees with them, and then use that same chainsaw to cut apart those logs into smaller sections. Now, you can get chainsaw milling attachments to use this tool to mill logs into smaller boards, but as far as uses go, that’s about it.

A circular saw on the other hand, has a small circular blade, so you definitely won’t be using it to cut down trees, to saw logs apart, or to mill logs either. Circular saws can only cut to a depth of a few inches, so this means that you can only work with much smaller materials. Generally speaking, circular saws are used for making cuts on boards, whether length- or widthwise. For instance, a circular saw would be used to cut a 2 x 4 or a plank of plywood into smaller pieces.

So besides the main uses of these saws and what the best power source is for them, there are a couple of other differences to keep in mind as well.

If you are planning on cutting down trees and milling them, a chainsaw is what you want to have. However, if you plant on cutting apart boards of any kind, it’s the circular saw that you want. Before you make a choice in terms of which machine you want to buy, just consider what you need your machine for.

Best Chainsaw for Milling of 2020

What are the Biggest Pros of Pocket Chainsaws?

What is the Best Length for a Pocket Chainsaw?